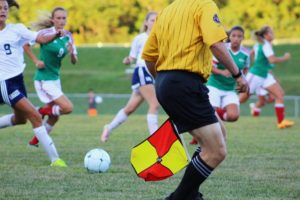 Sprained ankles should not be ignored.  Take for example, a typical weekend warrior who caught up with some friends to play flag football.  During the game, he landed his foot on an uneven surface in the field and twisted his ankle.  He did stop playing, went home and iced his ankle.  Weeks passed.  He had bought an ankle brace and went back to work.  He did have residual pain and swelling but had ignored his injury.  Until a month later, he could not stand it any longer, he sought treatment.

This scenario fits some of the cases we have encountered over the years at Family Podiatry of Maryland, LLC.

The ankle is one of the more complex joints in the human body.  Three bones form it- the tibia, the fibula and the talus.  There are seven major ligaments surrounding the ankle to support it.  A sprain involves either the stretching or tearing of these ligaments by the action of the foot, twisting the foot inwardly or outwardly.  Depending on the force of the injury, it involves one or multiple ligaments of the ankle joint.  The most common injured ankle ligament involves the anterior talofibular ligament, which is the weakest ligament on the outside part of the ankle.  An ankle sprain would result in a huge amount of swelling, pain and subsequent bruising to the area as blood moves to the area in the inflammation process.  The degree of the sprain and injury dictates its treatment.

Diagnostic tools such as an X-ray or an MRI will aid in the diagnoses.  An initial X-ray will give us a clue if a bone is broken.  However, an MRI will allow the doctor more knowledge about the soft tissue damage that may have occurred.  Most of the time, the treatment of immobilization, elevation, ice, and rest are sufficient for recovery.

However, in the scenario as described above with our weekend-warrior athlete, he suffered a fracture and is treated differently.  He was taken for surgery since his fracture had been displaced, and he predisposed himself for a longer recovery due to his hesitancy for an initial assessment.

The take away point to ankle injuries is neglected ankle sprains can lead to complications like scarring, weakened ligaments and undetected bone involvement.  These factors could lead to chronic pain, loss of mobility, arthritis, and a decrease in functional level.  In an injury, one always thinks of the inconvenience of getting to a doctor for a proper evaluation.  But in the end, a proper assessment can return a person to functional level faster, prevent loss of time from work, less visits to the doctor and medical expenses in actuality.  Custom orthotics/orthoses are indicated for post injury as a long term treatment plan.

If you recently sustained an ankle injury, please do not hesitate to make an appointment with Dr. Dang Vu today.  Our podiatry offices are located at 3 locations for your convenience- Reisterstown, Towson and Hampden.  It’s always wise to have it checked out as soon as possible by our best podiatrist.

At Family Podiatry of Maryland, LLC, Dr. Dang H. Vu, DPM, our foot doctor will administer a full evaluation, apply his best expertise in foot care to heal you in the shortest amount of time as possible and return you to functional level faster.